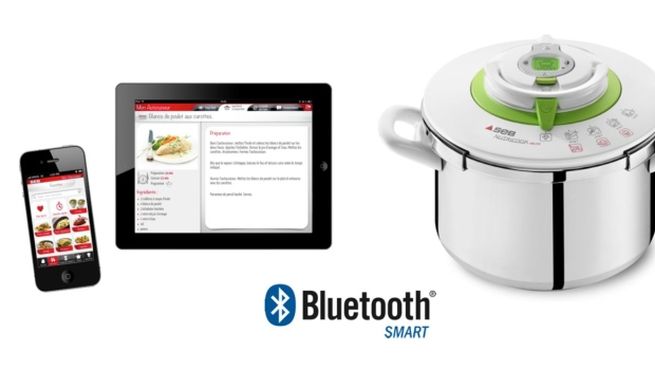 We have seen pressure cookers being turned into makeshift espresso machines. However with chimes of CES ringing at all corners of the world, the innovative scope of design is raising its stakes. Now we have come across a contraption which is probably the world’s first internet-connected pressure cooker.

Designed by French kitchenware maker SEB, the NutriCook Connect is still in its prototype stage. The cloud-based pressure cooker has been envisaged to optimize our cooking times. This is done with a specialized app for our mobile devices (including smartphones and tablets) that can connect to the cooker via wireless Bluetooth.

The app helps the user through the food’s preparation process with various notification credentials. When synced with the NutriCook Connect, the app will alert you when to dabble with the ingredients and when to tinker with the temperature. Furthermore, the app can also show you various recipes and their cooking times with the aid of the mighty realm of the internet.

In commercial terms, the app will be available in French for both Android and iOS devices. As for the NutriCook Connect, it will make its public debut at the CES 2014, which is going to take place from 7th to 10th January.