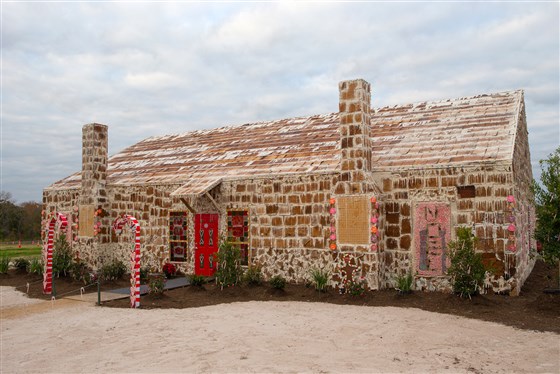 Sizes do matter, especially when it comes to magnificent contrivances leading up to this year’s Christmas. Yesterday, we talked about a massive yet heartfelt 9 ft tall Christmas Tree knitted by a group of English women. And, now it appears, Texans do not like to be outdone in such imposing affairs.

We make our assumptions from the world’s largest Gingerbread House with an astonishing volume of 39,201.8 cubic ft!

The Guinness World Record holding construction project was achieved under the umbrella of the Texas A&M Traditions Club, situated in the small city of Bryan, Texas. Bill Horton, general manager of the club, made it clear it was the community of the town that provided the main support behind this herculean endeavor.

In fact, 90 percent of all the supplies, including prodigious quantities of eggs, sugar, nutmeg and ginger, along with electrical components and lumber were actually donated to the cause.

Did we say ’cause’? Well, just as in the case of the Knitted Christmas Tree, the world’s largest Gingerbread House has a conscientious side to it.

The bold project was envisaged to raise money for a local trauma center. The visiting charges are also on the lower side, with rates of $3 for adults and $2 for children; though more generous monetary donations have been made.

Coming back to the supplies in question, the entire confectionery contrivance was made from approximately 3,000 lbs of brown sugar, 7,200 eggs, 7,200 lbs of flour, and to top that off 1,800 pounds of butter.

So, it comes as no surprise that the end result measures 60 ft by 42 ft, with the tallest point of the ‘structure’ boasting of a remarkable 20.11 ft.

One of the interesting criteria for the project was – the giant Gingerbread House had to be edible. Bakers and volunteers painstakingly managed to fulfill that aim, as was evident from the string of bees feasting on the delectable design (infused with astronomical 36 million calories).

Now, for those who are interested, the previous record for the world’s largest Gingerbread House was held by a 36,600 cubic ft construction inside the Mall of America in Minnesota.

As the core figures suggest, Texas A&M Traditions Club’s heroic contrivance (to be up till Dec 14th) beats it healthily by a 2,600 cubic ft margin.