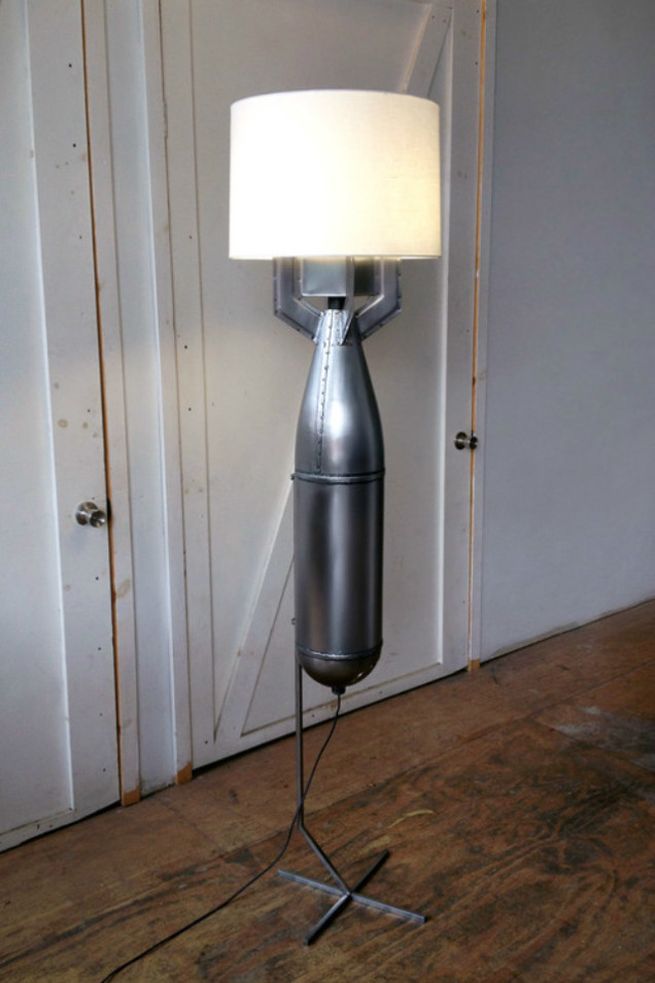 After the completion of Second World War, the United States armed forces have made their presence felt across Korea, Cuba, Panama, Somalia, Iraq and Afghanistan; just to name a few world locations. Suffice it to say, there are various weapons and armaments left from such military campaigns, starting from Cold War era to the 90’s.

And, the best part is – not all of these relics of war are destroyed in a combative or secretive manner. Some of them are conscientiously given a second life, and that too with a constructive function. New York’s aptly named Stockpile Studio boasts of expertise in such weaponry upcycling affairs, as is evident from the above pictured Megaton Floor Lamp.

Featuring an entire 100 lb bomb from the Korean War of the early 50’s, the fascinating arrangement gives us the illusion of the shell suspended in mid air. This is achieved with the lower-end minimalist stand that also doubles up as a safe floor support. Additionally, the original ‘war paint’ has been removed to make way for the hand polished glitter of the authentic steel, while the explosive components of the interior have been replaced with apt wiring and weight.

The Megaton Floor Lamp further vaunts its easy disassembling features. And, to notch up on the overall aesthetic scope, the designers have also devised an optional linen lampshade with cloth-wrapped cord and retro-styled plug.

With all these nifty features and the collector’s value of the bombshell itself, the vintage floor lamp will set you back by a whopping $1,680. And, if this is a bit out of your price range, you can gleefully rummage through other less costly items from studio’s shop.