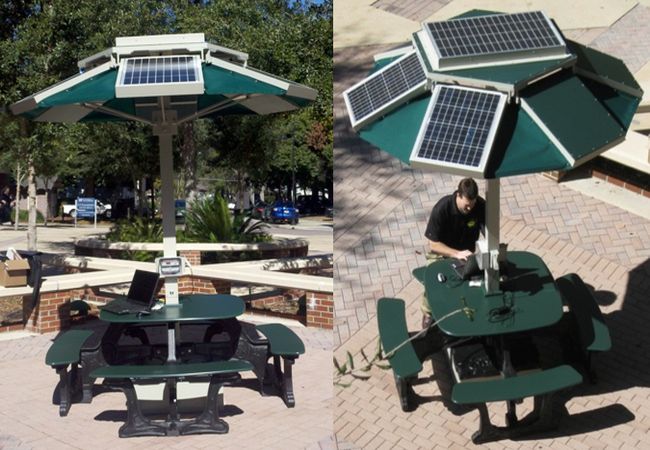 We had previously harped about the ten ingeniously designed solar-powered furniture designs. And, following on their heels is the newly unveiled Solar Power-Dok picnic table in the Lansing City Market, designed by local tech-company EnerFusion. Flaunting its integrated umbrella, that not only offers shade but also boasts of an array of solar panels, the table installation provides free and clean power to its occupants when the furniture is placed in direct sunlight.

The ‘green’ electricity generated by the photovoltaic cells are delivered to 4 GFCI outlets and 4 USB outlets, all incorporated within the furniture system. As an advantageous result, the picnic patrons can charge a host of their personal electronic gizmos, including mobile devices, tablets, cameras and even laptops. So, while the Lansing Board of Water & Light ceremoniously unveiled the sustainable mechanism, the board’s chairman J. Peter Lark had this to say about Solar Power-Dok’s practicality –

If you’re just sitting around having lunch, and your phone’s running a little low, why not just plug it in as I have just done. This is a symbol of what we’re all about.

Interestingly, this is not the only Solar Power-Dok system in the United States. The engineers of EnerFusion claim there are around 90 such mechanisms all around the country, which also includes 30 systems being set up inside college campuses. Each of the installations cost in the range of $4,000 to $10,000 – which is certainly feasible in the long run when considering the multitude of users who are practically utilizing the green technology.

Moreover, EnerFusion is will also introduce a full-fledged solar charging station in October christened as the Radiance that would operate via 11 USB ports and finger recognition systems. With such progressive advancements, one could estimate that solar power is credibly moving into the core ambit of the commercial realm – which surely augurs well for the vast avenues of green tech.