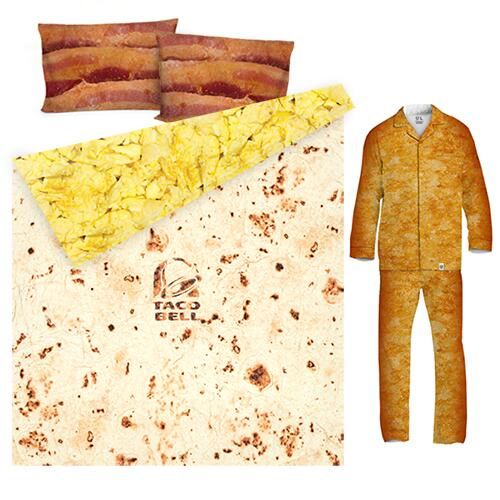 Advertisements depicting home objects made from food are not exactly new to us. But Taco Bell has done one better by actually offering some food-inspired stuff up for grabs. With tomorrow (27th March) being the chosen date to launch their all new breakfast menu, the fast-food chain is seriously shifting the gears in its publicity campaign. And as a result, one of the consumer-fueled prizes entail – a Taco Bell Crunchwrap bed sheet!

The lead up to the publicity gimmick pertains to the offering of around 1,000 Breakfast Phones to Taco Bell super-fans and influencers. These phones are basically pre-paid burner phones from which one will receive texts and calls that would serve up time-ticking challenges. On completing these ‘missions’, the user will be offered various kinds of prizes ranging from Waffle Taco-themed t-shirt, PJs to the aforementioned Crunchwrap themed bed sheet.

Taco Bell’s tweet also shows the image of two bacon-like pillows, which we presume belongs to the set that includes the bed sheet. In any case, the entire delectable collection will surely complement other food-inspired furniture like the Pizza chair.