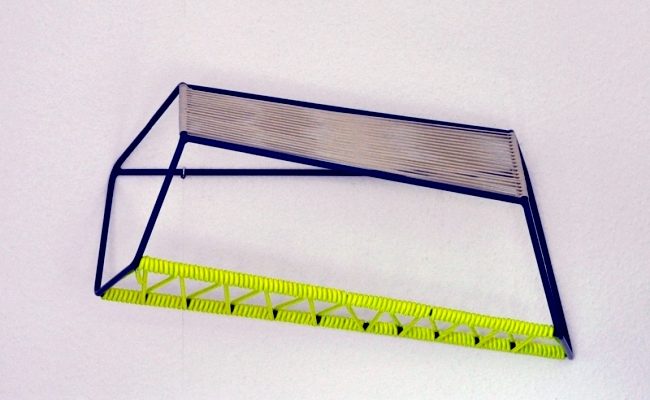 We have talked about the boundless nature of a design from the perspective of functionality. But what about a design that is ‘illimitable’ in its very structure? Well, the Quadrat is one such unique specimen, which goes beyond the confines of traditional forms.

Created by South Korean designer Dahm Lee, the Quadrat was conceived to challenge the predominance of rectangles in our kitchen and other rooms. According to the designer, almost every component of our kitchens, ranging from tops, shelves to cabinets are composed of rectangular elements. Consequently, their function is determined (and limited) by their shapes, angles and forms.

However, the Quadrat doesn’t stick to any kind of conventional aesthetic rule. The avant garde object is made from an irregular arrangement of thin steel bars wrapped in yellow and off-white rubber straps. As a result, the design alludes to a different kind of novelty with nondescript nature of functionality.

Lee has made it clear that the design aim was to achieve something aesthetically unique that would prove to an antithesis to the norm. The function of the object was of secondary importance, as it follows the form.

Interestingly, the Quadrat still boasts of its ‘multi-purpose’ credentials, with the usage pattern entirely depending upon the user. For example, we can use it to hang wine glasses and cooking towels, or even use it as a storage space for small items or as a lampshade. Ultimately, the decision belongs to us; and perhaps that is what makes the design perfectly unique.