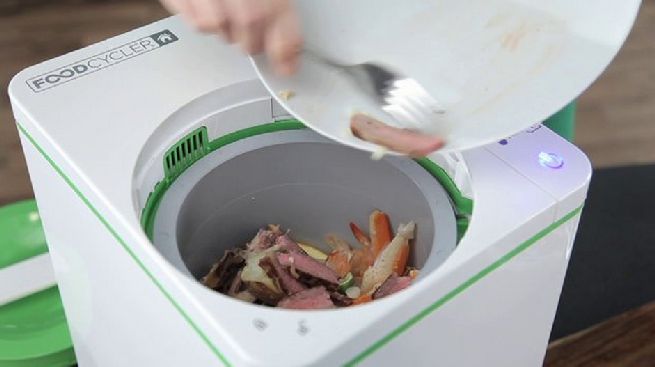 According to a startling statistical figure, around 215 kg (475 lb) of food is wasted per person in an year in developed countries. In fact, around 25 percent of your refrigerator’s stored food will probably end up in the kitchen trash bag. And as can be gathered from such ‘unapologetic’ wastage of resources, the carbon emission (mainly methane) resulting due to disposal of food wastage is remarkably greater than the footprint of average automobiles.

During such user generated predicaments, technological innovation remains as the only viable solution. Fortunately, the Food Cycler: Home alludes to this unique solution, with its advanced mechanism allowing ‘personalized’ composting of food scraps anywhere on the face of the earth (including condos and apartments that do not offer advantages of composting). Envisioned as a feasible alternative to green bins, the indoor residential composter has the ability to sterilize, deodorize and fertilize any kind of food product, ranging from fruits to meats.

The end by-product is an organic soil compost that can help your garden plants in their nourishing endeavors. And the best part is – the entire composting process just takes around 3 hours, while the contraption eschews any kind of odor and noise, thus upholding its seamless essence as a part of the modern-day kitchen.

Now, as far as hard statistical figures are concerned, we do not have much info on much electricity would be consumed by the Food Cycler: Home, or will these energy requirements supersede the levels of indoor composting. But when we take into consideration that more than a whopping 97 percent of 30 million tons of organic waste is left unattended every year, we will presume the technology is a step in the right direction.