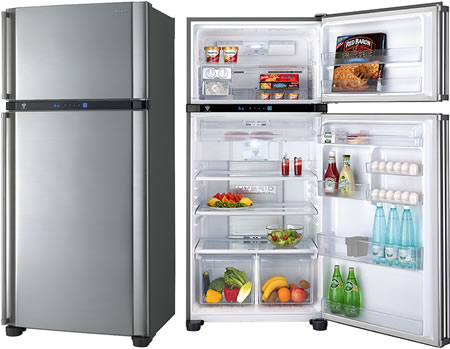 In our earlier post, we talked about how Japanese designs have evolved in the realm of toilets. And now, we have come across another avenue where the Japanese have shown their innovation. We are talking about electronic appliances, and how Sharp has kicked up a few ‘technological’ notches with their Plasma Cluster refrigerator.

The appliance (with six models) comes with a slew of advanced features that range from power saving attributes, user convenience to even earthquake resistance.

According to the company, the Plasma Cluster refrigerator has its indigenous power saving mode that comprises of sleep control and strategic ice-making function (which stops when the door is opened, thus keeping the internal temperature stable). This mode can save up to 25 percent of power consumption when compared Sharp’s earlier fridge products.

The usability oriented attribute of the Plasma Cluster refrigerator deals with its ‘voice and message’ option. This innovative feature gives the user info on various working states of the fridge, like – how many times the compartment doors have been opened in a day or the optimized setting temperature for the ice.

However, it is the seriously hardcore aspect of earthquake resistance that really tickles our geek fueled fancy. As we all know, Japan is an earthquake prone country. So as a definitive counter measure, the Sharp engineers have integrated special sensors that automatically lock the refrigerator’s doors in response to seismic activity. Additionally, this advanced safety mode also suppresses the deviation of the center of gravity, thus preventing the fridge’s body from from overturning. This not only keeps the appliance intact but also preserves the food inside at least for a few more hours (which can be crucial in emergency cases of power failure).

The first model of the Plasma Cluster refrigerator will be commercially available on the market from 20th September of this year.