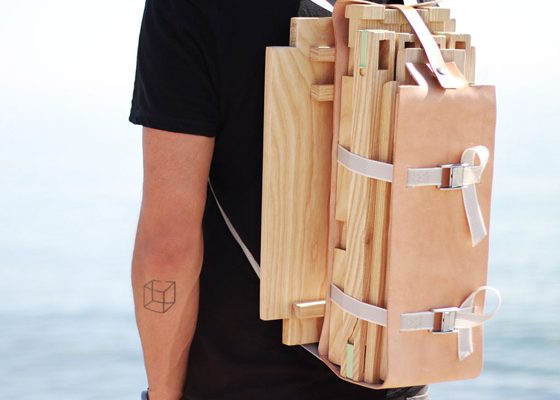 Our contemporary needs of furniture traverse the conventional scope of posing just as showpieces in the living rooms. Modern ideals also allude to the factors of functionality and spatial efficiency, both of which go beyond the ambit of aesthetics. The Nomadic Chair conforms to this righteous trend, by simply acting as a chair which can also be carried as a backpack.

Designed by Jorge Penadés, the project is entirely based upon what the designer calls the ephemeral context (or short term context). Hence, the design exhibits its fair share of flexibility both in terms of function and form.

Coming to its structural considerations, the Nomadic Chair comprises of a modular framework that totally eschews any kind of screw, nail or glue. Rather the system crafted from sturdy solid ash and powder coated steel, is influenced from traditional wood joinery work that can be assembled by the user’s hands. The entire arranging method just takes around 2 minutes, which further demonstrates the ‘dynamic’ usage pattern of the conception.

In a more collective scheme of things, the Nomadic Chair is just a part of Penadés’s Nomadic Seating Series. In this regard, the designer is also looking forth to develop various kinds of seating mechanisms (other than just chairs) that would cater to this flexibility of usage. Of course, the same design principle also applies here, where furniture pieces are treated as dynamic objects rather than static decorative components.