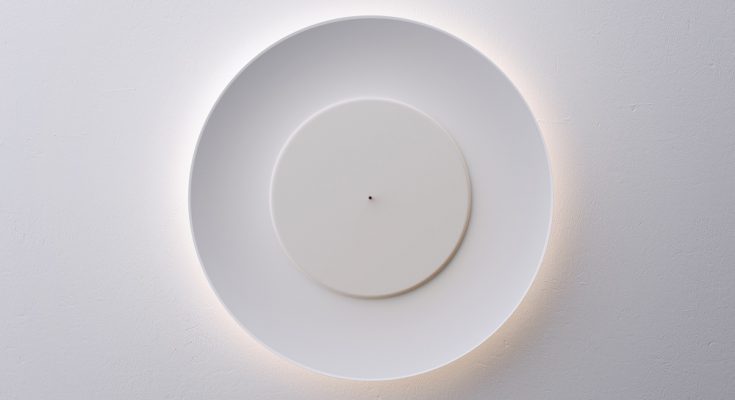 We have previously talked about lamps that symbolize hot African landscapes and we have harped about lamps that even mimic the sun after rainfall. However, this time around the scale of the ‘natural effect’ is notched up to a whole new level, with the Lunaire lamp being inspired by the rare phenomenon of eclipses.

Designed by Ferreol Babin (for Italian company FontanaArte), the wall-mounted Lunaire is composed of a small front disc which is placed centrally inside the circumference of a larger concave aluminium diffuser. This front disc contains the main light source. So, when the light is turned on, it gets diffused along the reflective concave surface, thus creating a wondrous eclipse like effect.

In this regard, the lighting effect can actually be regulated by altering the position of the disc with respect to the diffuser. We are presuming that on closer proximity of the disc and the reflector, the illumination gets more intense, which makes the Lunaire a credible lighting solution for large interior spaces. However, we can also increase the distance between the components, which changes the wall light into a soft glow that subtly accentuates your decor ambiance. Furthermore, the smaller front disc is available in both white and black color scheme. This adds yet another ambient dimension to the whole dynamic scope of light and shadow.